The Ur-text to 'The Country Dance': An Unrecorded Poem

This note discusses an unrecorded poem, an antecedent of ‘The Country Dance’, and touches on one of its characteristics, suggesting that elements in the poem draw attention to the later poem’s implicit eroticism. The note also comments on Graves’s selective interpretation of the illustration in drawing out a larger theme. 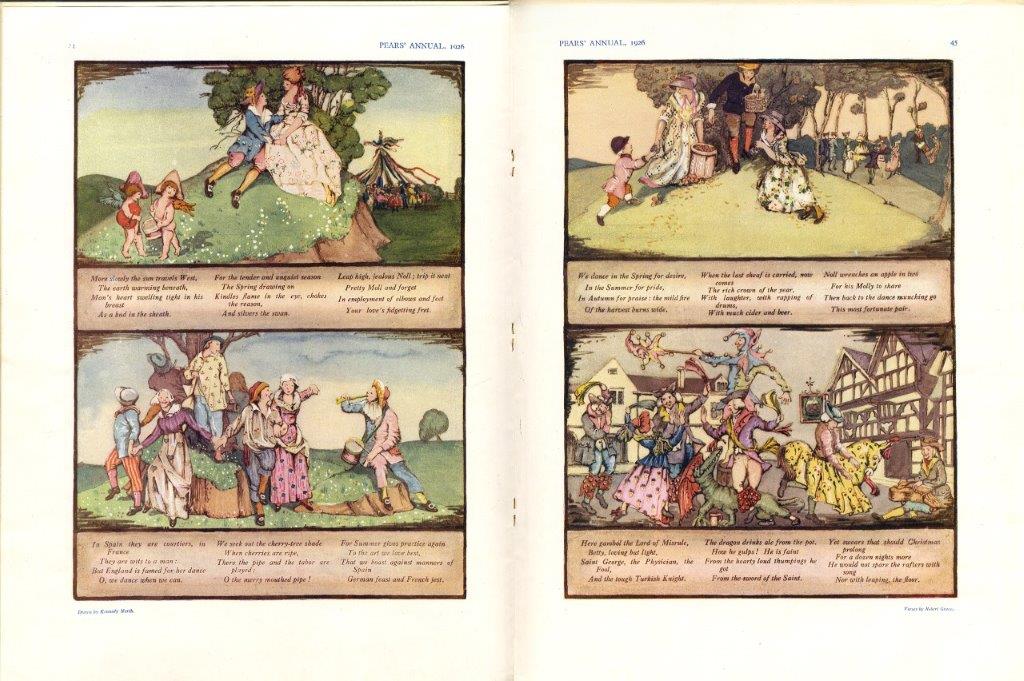 In its December 1926 issue, Pears Annual published an untitled poem by Robert Graves composed in four sections to four colour illustrations signed Kennedy North. The poems and pictures evoked the seasons in terms of dance. In the spring, Pretty Moll can forget her ‘fidgeting fret’ in the ‘employment of elbows and feet’. ‘Summer gives practice again | To the art we love best’; in Autumn, dancing is done for praise, and at Christmas, the dragon gulps ale and would gladly prolong leaping ‘for a dozen nights more’. The seasons seem to correspond to the stages of maturation: in adolescence, dancing sublimates one’s nervous energy; in early middle-age, dancing has been raised to an art; in late middle-age, one’s dance artistry might win admiration; and in old age, dancing has devolved into carefree leaping.

Graves published a shorter version of the poem ‘The Country Dance’ six months later in Poems 1914-1926, consisting of the first of the four sections slightly revised with a revised quatrain from the second section. No illustration appears with the poem but a trace of the original intent lingers there as a headnote, ‘Verses for a Picture’. ‘The Country Dance’ continued in Graves’s canon until 1961, making its last appearance during his lifetime in Collected Poems (1961).

Possibly of interest, ‘The Country Dance’ changes ‘In employment of elbows and feet | your love’s fidgeting fret’ (‘Spring’), to ‘By employment of elbows and feet | The green sickness of love’. The Green Sickness (Hypochromic anemia) was associated in the eighteenth and nineteenth centuries with girls approaching puberty, and slender women who some believe may have been indulging in a fashionable lassitude. Graves equates the Green Sickness with the disabling melancholy of pubescent yearning, an idea prompted perhaps by the original illustration in which gaily dressed lovers sit beneath a tree while two cupids play what is probably stirring music. One cupid seems even to be tossing them a come-hither glance over his shoulder. Behind the lovers, almost off-stage (in Latin, ob-scena) we see the tree-shape echoed in a Maypole dance whose ancient origins are said by some (Hobbes and Freud among them) to involve priapic symbolism, and sacred trees.

The illustrator better known as Stanley North (he adopted “Kennedy” after his marriage to Helen Kennedy), had an interest in folk dancing as contemporary art, and earlier published a book on English folk dancing (1921). According to Sanford Schwartz, North was a colourful and charming character. ‘He liked to take charge of people’s lives and trading on fabricated family connections; he was a bit of a charlatan’.

The inspiration for Graves to write ‘verses for a picture’ probably came from William Nicholson, Graves’s father-in-law. North was a family friend of sorts to William and Edith Nicholson and had written the ‘first significant publication on Nicholson’ in 1923 in the Contemporary British Artists series. (Sanford Schwartz, William Nicholson. London: The Paul Mellon Centre for Studies in British Art, 2004).

More slowly the sun travels West,
The earth warming beneath,
Man’s heart swelling tight in his breast
As a bud in the sheath.

For the tender and unquiet season
The Spring drawing on
Kindles flame in the eye, chokes the reason
And silvers the swan.

In Spain they are courtiers, in France
They are wits to a man:
But England is famed for her dance
O, we dance when we can.

We seek out the cherry-tree shade
When cherries are ripe,
There the pipe and the tabor are played:
O the merry mouthed pipe!

For Summer gives practice again
To the art we love best,
That we boast against manners of Spain
German feast and French jest.

We dance in the Spring for desire,
In the Summer for pride,
In Autumn for praise: the mild fire
Of the harvest burns wide.

When the last sheaf is carried, now comes
The rich crown of the year,
With laughter, with rapping of drums,
With much cider and beer.

Noll wrenches an apple in two
For his Molly to share
Then back to the dance munching go
This most fortunate pair.

Here gambol the Lord of Misrule,
Betty, loving but light,
Saint George, the Physician, the Fool,
And the tough Turkish Knight.

The dragon drinks ale from the pot.
How he gulps! He is faint
From the hearty loud thumpings he got
From the sword of the Saint.

Yet swears that should Christmas prolong
For a dozen nights more
He would not spare the rafters with song
Nor with leaping, the floor.

The authors would like to thank Marilynn S. Olson for help in identifying Stanley North and his relationship to William Nicholson.

For additional discussion on Graves’s composing poems for pictures, see Paul O’Prey’s article in this issue: ‘Robert Graves’s Favourite Poem? The One that Saved his Life’ (53-60).

One recalls Cleland’s references to maypoles for example: ‘and now, disengag’d from the shirt, I saw, with wonder and surprise, what? not the play-thing of a boy, not the weapon of a man, but a maypole of so enormous a standard, that had proportions been observ’d, it must have belong'd to a young giant’. John Cleland, Fanny Hill, or, Memoirs of a Woman of Pleasure (New York: HarperPerennial, 2013), p. 167.