Abstract: This note brings to light an unrecorded poem written by Robert Graves in 1940 for Margaret J. Russell, who had been Jenny Graves’s nanny, 1919-1921.

It leaves us in consequence, short of rent.

But if we raise the legal tender,

Be off to Paris, for a quick weekender.

Tales of other men all remind us

We too – can have a jolly good time

And departing leave behind us

Loaded evidence of a pushing crime.

The eight-line unpublished poem is written on the verso and recto of facing leaves in a small oblong autograph book that belonged to Margaret J. Russell (née Reed), whose signature appears on the front pastedown.

Miranda Seymour describes Russell as ‘a doting Geordie nanny’. Graves and his wife Nancy Nicholson hired her in March 1919 to look after Jenny, their first child. Although she and Jenny became virtually inseparable, ‘doting’ underplays her stature and influence in the family. Richard P. Graves describes her as having a ‘warm heart and [a] fund of common sense [...] able to temper Nancy’s rigid adherence to the latest set of up-to-date methods for bring up children’. He says that Margaret was a forceful person who apparently took over management of the house, ‘having charge of the money, & giving R & N pocket-money weekly out of their own money’.

Two years later, however, in February 1921, Nancy dismissed her for ‘spoiling little Jenny’ (Seymour, p. 100), or perhaps, for failing ‘to follow [...] strict instructions as to diet and daily routine’ for Jenny and David, their young son. By this point, what seems to have become a conflict between the warm-hearted, old-fashioned Margaret (a self-described ‘stick-in-the-mud’) and the modern, ideological and slightly frazzled Nancy (with Graves caught in the middle) led Margaret to fall ill: an illness that Graves’s mother, Amy, called a nervous breakdown.

Dismissing Margaret took a curious form. Rather than break the news themselves, Robert and Nancy sent her to Graves’s parents in Wales ‘on the pretext of a holiday [...] relying on Amy to hand her their letter of dismissal’ (Wilson, p. 266; Assault, pp. 241-42).

Imagine the effect on Margaret. For two years, Jenny had been the centre of her life, as if she were Jenny’s mother.

Margaret was working at a doll’s dress for Jenny when told of her dismissal; and she cried out: ‘Oh my Jenny! My darling Jenny!’ in floods of tears. APG who witnessed this miserable scene, wrote sympathetically in his diary that evening: ‘I hope Nancy will get as faithful a servant in her place”’. (p. 242)

Despite everything, Margaret remained on affectionate terms with Graves, as the many entries in his diary (1935-1939) attest, portraying a warm friendship that involved gift-giving, teas, walks, gossipy personal confidences, movies, even a proposed trip with Riding to France. (Might this have been the ‘quick week-ender’ to which Graves’s autograph refers?)

Along the way, Margaret fell into the habit of addressing Graves as ‘Captain’ and referred to him as ‘The Captain,’ the rank he’d achieved in the Royal Welch Fusiliers. Graves gave himself to the practice cheerfully, for example inscribing her copy of his Work in Hand: ‘To Margaret with love from The Captain, 1942’. 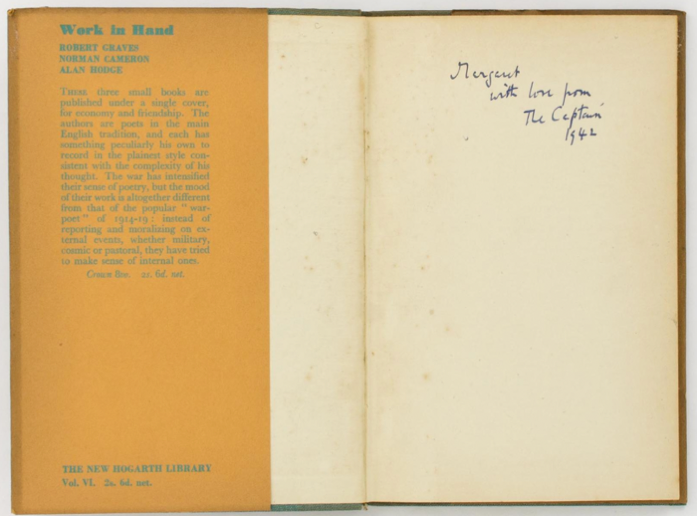 Her surviving letters suggest she was able to speak freely to him and trusted her opinions would be valued. In 1948, soon after his friends Dorothy and Montagu Simmons and their children left England for America to join Riding and her new companion and collaborator, Schuyler Jackson, on their farm at Wabasso to work on the etymological dictionary project, Margaret wrote to Graves sharing her doubts about the prospects of their adventure:

They have a bungalow near the Jacksons and are now in the throes of grapefruit picking and packing for export ... I feel they have done the wrong move, but I am such a stick-in-the-mud I may be wrong. (R. P. Graves, White Goddess, p. 150)

Margaret was not wrong: the Simmonses were soon scrambling to return home.

In 1941, a year after inscribing the verse in her autograph book, Graves and his new wife, Beryl, re-hired Russell to come to Vale House for ‘five or six weeks’ to help with the housework. Margaret Russell would remain close to The Captain, as the inscription in Work in Hand, demonstrates, and in the fall of 1959, when Graves was convalescing at St Thomas Hospital in London, after an emergency prostatectomy and ensuing complications, Margaret came to visit (p. 34).

Michael Joseph is Editor of The Robert Graves Review, and Vice President of the Robert Graves Society. Recent publications include ‘How English Poetry Learned to Get Angry after 500 Years of Having a Stiff Upper Lip’, in Emotions as the Engine of History (London: Routledge, 2021), and three poems in Book 2.0 (Spring 2022). ORCID: https://orcid.org/0000-0002-8117-5739.

Jean Moorcroft Wilson, Robert Graves: From Great War Poet to ‘Good-bye to All That’ (1895-1929) (New York: Bloomsbury Continuum, 2018), p. 266. R. P. Graves notes differences between Nancy and Margaret that contributed to the frosting of their relationship, such as Nancy’s refusal to allow Margaret to teach her children prayers (Assault, pp. 230, 241).

The dictionary project, called variously The Dictionary of Exact Meanings and The Dictionary of Related Meanings, was a kind of etymological dictionary, but one in which Riding and Graves – and ultimately Riding and Jackson – would include the poetic meanings of words. See T. S. Matthews, Jacks or Better: A Narrative (New York: Harper & Row, 1977), p. 157.