Abstract: This note establishes Robert Graves as the author of a letter published in The Sunday Times, 6 June 1937 ascribed to Alan Hodge, and discusses Graves’s reasons for concealing his identity as the letter writer and why he asked Hodge to assume spurious authorship.

On Sunday 6 June 1937, The Sunday Times printed a letter in response to Desmond MacCarthy’s review of Ernest Barker’s Oliver Cromwell and the English People, which appeared a week earlier. 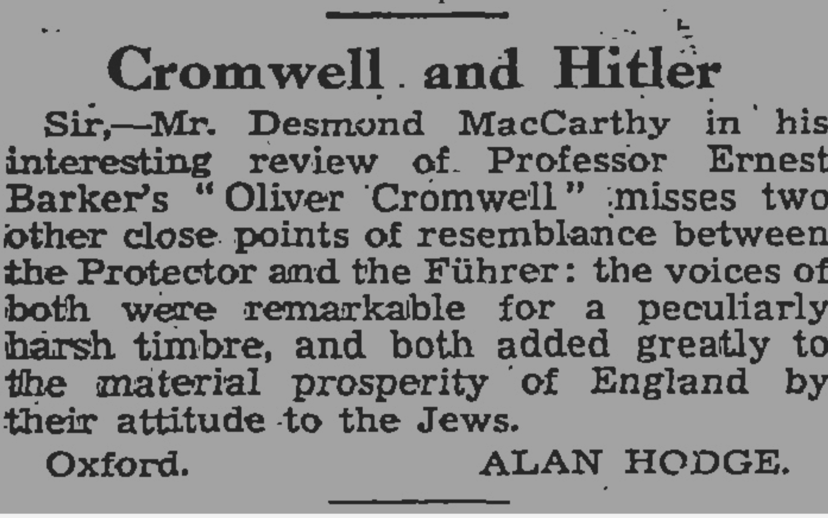 Appearances to the contrary, the author of the mocking letter was Robert Graves, who asked Hodge to submit the letter under his name in a letter dated 1 June.

There is a slight letter I would like to send to the Sunday Times but can’t, for reasons of having books published in Germany and also being Karl’s official guarantor in Anglo-German passport situations. Would you honour me by being its author?

The letter Graves had written was materially the same as the one published by The Sunday Times.

Aside from publicly declaring admiration for the Jewish people and ridiculing Hitler and Cromwell, the letter intends to scorn the mutually flattering comparisons of Adolf Hitler and Oliver Cromwell in MacCarthy’s sycophantic review. Graves may also have been criticizing what he perceived as implicit support for Neville Chamberlain’s policy of appeasement – a policy Barker vocally supported.

In his review, MacCarthy begins his portrait of Cromwell by citing Samuel Rawson Gardiner’s wildly positive (1899) appraisal of The Protector as ‘the greatest because the most typical Englishman of all time’. He then turns to Barker’s more immediate view of Cromwell as ‘the incarnation – perhaps the greatest we have had – of the genius of English Nonconformity’. Having established an authoritative line of thought that Cromwell is not merely admirable but inseparable from any notion the reader might have of the English national character (and therefore of himself or herself), MacCarthy then lists several traits Cromwell shares with Hitler, and the English Revolution with the National Socialist Revolution.

He praises the Nazis for unifying Germany and giving Germans new self-respect and prestige, asserting that Nazis ‘feel as noble and resolute as Cromwellians’. The National Socialist Revolution, he asserts, boils down to ‘“a reformation of manners” – to use Cromwell’s phrase’. He acknowledges Nazi antisemitism in passing: the price of these improvements has been ‘anti-Semitism, ubiquitous espionage, imprisonment of opponents in concentration camps, and what Professor Barker calls “the sharp and terrible purge of midsummer 1934”’.

The matter-of-factness of MacCarthy’s tone, the stage gravitas of ‘sharp and terrible’, will be uncomfortable for many readers (and for some painful), but not, alas, as Austin Woolrych reminds us, an audience of MacCarthy’s contemporaries:

In the earlier years, before the brutal and degrading aspects of fascism were fully revealed, the comparisons [with Hitler] were not always detrimental. John Buchan, for instance, in a biography of Cromwell published in 1934, could write: ‘A corporate discipline, of which quality is the watchword, seems to many the only way of salvation’.

Historians base predictions on precedent and context, and Hitler was in an important sense a sui generis bad actor. One didn’t know that Hitler was Hitler. Nevertheless, 1934 was not 1937. By June 1937, the single, exposed word ‘anti-semitism’ could hardly comprehend the poisonousness of the Law for the Restoration of the Professional Civil Service of 7 April 1933 (which excluded Jews from civil service), the book burnings of books by Jews in 1933, the imposition of a 1.5 percent quota on the admission of ‘Non-Aryans’ to public schools and universities, the 1934 banishment of Jewish actors from the stage, and of course the Nuremburg Race Laws of 1935. Thus, it seems remarkable to me, and I believe it seemed remarkable to Graves, that MacCarthy felt at liberty to say: ‘Looking on from outside we wonder how the German people can tolerate many of the actions of their leader. But you see the spirit that animates him!’ (italics are mine).

To provide a bit of context, British sentiment in the nineteen thirties sharply divided on how to treat German territorial expansion. The Conservatives, the House of Lords, Royalty, the upper classes, and of course British government led by Neville Chamberlain ‘the high priest of appeasement’ argued that Hitler could be bought off, and warfare averted, and pursued a policy of appeasement with a kind of myopia that bordered on madness. The Labour Party and a few Conservative dissenters saw the matter for what it was. In December (six months after MacCarthy’s review), in a Parliamentary debate, Churchill famously warned of the ‘great evils of racial and religious intolerance’.

Graves had no illusions about the fascists, having fled Deyá the previous summer (2 August 1936) before the advance of the Spanish Civil War. His sarcastic echo of MacCarthy’s arbitrary comparisons confirms that the casual treatment of Nazi crimes rankled him. Graves also tells Hodge he could have added that neither Cromwell nor Hitler played the piano, both were in the army, emphasizing the extent to which he viewed these comparisons as nugatory.

Expressing admiration for Jews, Graves firmly places the focus where he knows it belongs, in agreement with Churchill, who in the same speech quoted above, declares: ‘it is a horrible thing that a race of people should be attempted to be blotted out of the society in which they had been born’.

Graves gives two reasons for remaining anonymous. He says he has some books in Germany whose sales he doesn’t want to injure, and he is the guarantor of Karl Goldschmidt’s passport. The latter reason, which governs I think, amplifies the seriousness of the review’s political dimension. As readers of Graves’s biographies will recall, Goldschmidt, then acting as secretary to Graves and Riding, was a young German Jew who had fled Nazi Germany. Soon after they met him in 1933, Graves and Riding befriended and then hired him to do light secretarial work. By 1935, he had become a much-loved member of their circle, and would remain Graves’s secretary and collaborator for many years. As the guarantor of Goldschmidt’s passport, Graves may have had two factors to keep in mind.

On the day he wrote to Hodge, he noted in his diary, ‘Trouble with Karl’s passport. Tried unsuccessfully to get interview with German Consul about it’. Although the matter seems to have been cleared up with a second visit to the Consulate, Graves would have been cautious about any public pronouncements that might provide fodder for Germans at the Consulate (whom he had reason to distrust) wishing to do harm. He may also have worried that his letter could be read as a smack at the British authorities whose interests MacCarthy benefitted. Powerful men have thin skins, and the precariousness of Goldschmidt’s position had been dramatically demonstrated a year earlier during their flight from Deyá:

This was a dangerous moment for Karl Goldschmidt. All refugees were to be returned to their own countries, and in his case this would have meant being compelled to board the Graf Spee, a German pocket-battleship in Palma harbour, en route for Germany and a concentration camp’. (Years with Laura, p. 241)

Robert ‘pleaded strongly’ on his behalf and persuaded the authorities to permit Goldschmidt to board the Grenville with them, instead. The narrow escape impressed Graves – more lastingly perhaps than Goldschmidt, who may not have grasped the danger. When Germany revoked all Jewish passports in October 1938, Graves fired off a letter to warn him, and he replied: ‘This passport withdrawal about which you write: I have had no idea that this was on the programme again: your mentioning it is the first I heard about it’.

Alan Hodge was the logical person for Graves to turn to. He had been in Mallorca the previous summer and fled alongside Graves, Riding and Goldschmidt. He would have accepted Graves’s explanation immediately. And their friendship was fresh – Hodge would entertain Graves and Riding on 8 June, two days after the letter appeared in The Sunday Times, and ten days after that, Hodge and Beryl Pritchard, whom Graves had met in January, visited Graves and Riding in Nottingham (Years with Laura, p. 275). While Graves humbly asks Hodge to ‘honour him’ by signing the letter, Hodge surely understood it was certainly no less an honour to be asked.

The phrase ‘would you honour me by being its author?’ might be understood as a mere courtesy, and perhaps it was that; but perhaps we might look deeper for a more personal explanation. For Graves, a deep believer in symbols and rituals, asking Hodge to sign his name to the letter signified an exchange of gifts. Submitting himself to Graves’s will – an act of self-subordination and deference – Hodge assumes the identity of the author of the letter – an act of possession, of assertion. This commingling of identities represents a reciprocal honour and a bond that would eventuate in two successful collaborations: The Long Weekend (1940), and The Reader Over Your Shoulder (1943).

Many thanks to William Graves for permission to reprint the contents of the letter to Alan Hodge. It was he who discovered the letter unmasking his father as the author of the ‘letter within the letter’ published in The Sunday Times.

The transcript of the letter, courtesy of William Graves:

There is a slight letter I would like to send to the Sunday Times but can’t, for reasons of having books published in Germany and also being Karl’s official guarantor in Anglo-German passport situations. Would you honour me by being its author?

review misses two other close points of resemblance between the Protector and the Führer. The voices of both were remarkable for a particularly harsh timbre, and both added greatly to the material prosperity of England by their attitude to the Jews.

That’s all ... of course, one think of many other points of resemblance, e.g. neither of them could play the piano, both of them at one time or other served as soldiers, but I think these others are enough. So looking forward to seeing you.

I have written 12 (twelve) poems in Lugano

An Italian joke: why is the Duce like a chamber-pot? [Drawing]

Answer: The chamber pot only has one handle; the Duce has two.

Only I can’t draw akimbo Duce’s: One tells the joke dramatically a-kimboing oneself, first with one arm then with two, & making a motor-bicyclist scowl for the Duce.

MacCarthy is repeating Barker’s comparison, which Barker had originally rehearsed in an address before the Freidrich Sthamer-Gesellschaft in Hamburg in 1936. Austin Woolrych, ‘The Cromwellian Protectorate: A Military Dictatorship’, History, 75.244 (January 1990), 207. In the review, it’s unclear to me where Barker ends and MacCarthy begins.

These are Barker’s comparisons, but MacCarthy repeats them without comment, which must be read as implicit endorsement.

Miranda Seymour, Robert Graves: Life on the Edge. (New York: Holt, 1995), p. 227. Seymour dedicated her biography of Graves to Karl who in 1940 changed his last name from Goldschmidt to Gay.

Graves’s diary for 3 June reads: ‘To German Consulate. Persuaded the woman there to phone Zurich for an extension of Karl’s passport: she made the plea that [he] would lose his employment and be on their hands. He consented.’ ‘June 3 Thursday’, 3 June 1937, Diary

In 1953, Simon Gough was told by his mother, Diana Graves (the daughter of Robert’s half-brother Richard ‘Dick’ Graves) that Graves won the day by ‘refusing to leave Majorca on the last British destroyer unless Karl could accompany him’. (Simon Gough, The White Goddess: An Encounter. London: Galley Beggar Press, 2012), Kindle ed. location 845.

One sees this usage in Graves’s writing again almost thirty years later in a letter to the anthologist Louis Untermeyer in which he mentions having been invited by the Swedish Academy to write in support of Robert Frost’s 1963 Nobel Prize nomination. ‘I told them to honour themselves, before it was too late, by honouring Robert Frost (name in large caps)’. (Graves to Louis Untermeyer, 13 January 1963. In private collection).